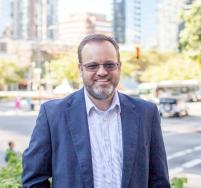 Jason Byassee is the senior pastor at Timothy Eaton Memorial Church. He is from North Carolina originally, his wife Jaylynn is from west Texas, and they both love pastoring as transplants to the United Church of Canada.  Jason has worked previously as a seminary professor in Vancouver, as a pastor in British Columbia and North Carolina, and a journalist in Chicago.

He has studied at Davidson College (B.A.) and Duke University (M.Div. & Ph.D.), written or co-edited more than 20 books, and lectured or preached in eight Canadian provinces, 26 US states, and seven other countries. He has written some 350 articles in such diverse venues as Christian Century, the Vancouver Sun, Theology Today, Sojourners, and Religion News Service.

The Revs. Byassee have three kids. Jack and Sam are in universities in Iowa and Texas, and Will followed them to go to secondary school in Toronto, and he’s been a champ about it. Their sweet (and old) yellow lab is named Charlie.

Jason is a fan of Duke basketball, Carolina Hurricanes hockey, and Carolina Panthers football (roughly in that order). Since he’s moved to Toronto from Vancouver recently, he’s heard many appeals to follow the Raptors (considering), the Jays (even more open), and the Leafs (not so open-the Hurricanes have his heart). He recognizes he might need to learn how to play golf!

He’s also a nerd (Star Wars, LOTR, Eagle Fang karate, Louise Penny novels—this list could expand) but mostly he is a church nerd. He’d visit any church anywhere across the world. His kids would prefer roller coasters now and then.

Since arriving at TEMC in September 2022, he has drunk alarming amounts of a variety of beverages with TEMC folks, as he’s getting to know the church, neighbours, friends, and this incredible city. He loves bumping into Jesus in scripture, in the neighbour, in the city, and even, in the church. This church he gets to lead is amazing and he would be so honoured to be your pastor.

If you’re a keener, check out his credentials and work at www.jasonbyassee.com. You can also find him on Facebook, Twitter (@jasonbyassee) and Insta (realjasonbyassee).